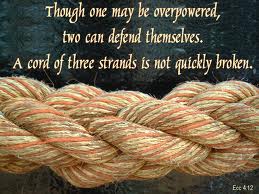 Now it does take two, but what it takes two to do is being confused. Men don’t want their headship because society has placed the black woman in head so long that it is the norm that the men allow us to lead them. However, those wanting their place don’t want responsibility with it. There is a misconception with this, because some women are out here doing all this stuff buying with material then the wife who has her children and the home is taking care of her business which does not allow for all that stuff. In other words, somebody is going to suffer, something is going to suffer if he is demanding your money and his.

See it like this…if there is not enough money to cover expenses then yes it takes two. However, if there is not enough money still but a chance to increase that then someone has to be willing to either learn or expound on what they know to increase the income flow. Hence, if someone is not willing to do that for their family then they can’t complain about it takes two, because if it takes two for one thing, it two for all things. Education, work, chores, etc. Anything else is unequally yoked.

So if I am uneducated and have to do something I don’t like to make money and most likely spend a great deal of time trying to make ends meet and my mate has chosen to educate himself to ease the load of work that he does. I cannot complain because I have to work long hours are all the time when I have the same opportunity to better my playing ground. Does that make sense?

We are speaking of unequally yoked today. Problem solving.